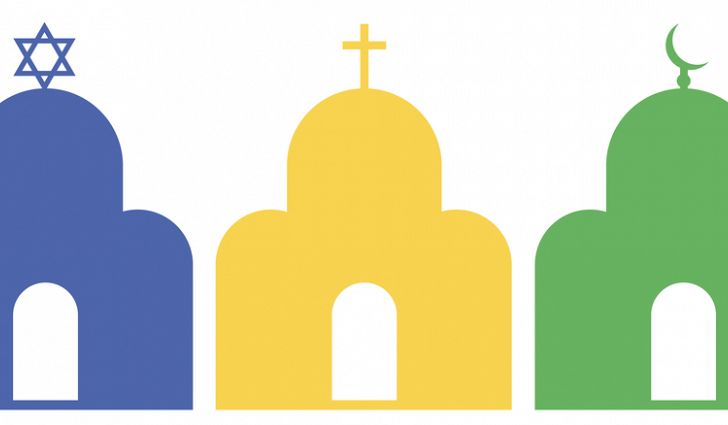 This surah is the most concise and eloquent description of the paradigm of the Abrahamic faiths, namely Judaism, Christianity and Islam.  It describes Monotheism and accountability in Afterlife and how God has created humans in the finest state.  It emphasizes that unless humans live this paradigm and perform good deeds, they are vulnerable to degenerate to the lowest of the low.

The first three verses of this surah cite the totality of evidence of the genuine revelation of the Abrahamic faiths and their positive history as a proof for the paradigm proposed here.

The surah can serve as the best platform for interfaith tolerance and pluralism among the followers of the Abrahamic faiths and gives a vision, within which to conceptualize human psychology.

The interfaith tolerance for the Jews, the Christians and the Muslims, lies in the person of Patriarch Abraham, who is referred to as Hanif’ in the holy Quran. Seyyed Hossein Nasr and colleagues describe the meaning of Hanif’, under the commentary of 98:5:

Going back to the theme of human vulnerability, we believe it should be considered as a sister surah to Surah 103. According to Seyyed Hossein Nasr and colleagues in the introduction to this surah:

The main theme is found in vv. 4-6, which are among the most famous verses in the Quran. They speak to the human condition, which originated as the most exalted of creation, but can fall to the lowest of the low (v. 5) when human beings fail to live in accord with their true nature, a message similar to that of 103:2-3: Truly mankind is in loss, save those who believe, perform righteous deeds, exhort one another to truth, and exhort one another to patience.

In the name of Allah, the Most Gracious, the Most Merciful.

“By the Fig and the Olive.”

This is symbolism for Jerusalem or Christianity.

“By the Mount Sinai.”

This is symbolism for Moses or Judaism. According to Seyyed Hossein Nasr and colleagues:

“By this safe town of Makkah.”

This is symbolism for Islam or the Prophet Muhammad, may peace be on him. According to Malik Ghulam Farid:

‘The Fig,’ ‘the Olive,’ ‘Mount Sinai’ and ‘this Town of Security’ have been invoked as witnesses to support and substantiate the claim made in the Surah that the Holy Prophet shall succeed in his mission. ‘The Fig’ and ‘the Olive’ are symbolic of Jesus; ‘Mount Sinai’ of Moses; and ‘this Town of Security’ of the Holy Prophet. These three verses together point to the well-known biblical reference, ‘The Lord came from Sinai, and rose up from Seir with them; and He shined forth from Mount Paran’ (Deut. 33:2).

According to Seyyed Hossein Nasr and colleagues regarding this verse:

The first three verses of this surah cite the totality of evidence of the genuine revelation of the Abrahamic faiths and their positive history as a proof for the paradigm proposed here.

“We created humans in the finest state.”

The holy Quran also states: “Allah is He Who made the earth a resting-place for you and the heaven a canopy.  He formed you and then shaped you into a beautiful state and provided you with all good things. That is Allah, your Lord, so glory be to Him, the Lord of all the worlds.” (40:64)

This verse talks of the great spiritual, moral, social and intellectual potentials of man and rather than giving a pessimistic view inherent in Original Sin of Pauline Christianity, gives us a positive and optimistic message.

“But they degenerate to the lowest low!”

Those who do not live in the paradigm of Monotheism and constant cognizance of accountability in the Afterlife and as such perform good deeds are vulnerable to ‘degenerate to the lowest low!’

“Except those who believe and do good deeds.”

The Quran is not monopolizing or limiting the salvation and is giving the key to success to everyone in searching the truth and doing good deeds.  However, there is no denying that the better one’s beliefs or world view and the better one’s actions or deeds, greater is the likelihood or excellence of salvation.

Salvation cannot be monopolized as the Quran states:

Surely, the Believers, and the Jews, and the Christians and the Sabians — whichever party from among these truly believes in Allah and the Last Day and does good deeds — shall have their reward with their Lord, and no fear shall come upon them, nor shall they grieve. (Al Quran 2:62)

Surely, those who have believed, and the Jews, and the Sabians, and the Christians — whoso believes in Allah and the Last Day and does good deeds, on them shall come no fear, nor shall they grieve. (Al Quran 5:69)

As to those who believe, and the Jews, and the Sabians, and the Christians, and the Magians and the idolaters, verily, Allah will judge between them on the Day of Resurrection; surely Allah is Witness over all things. (Al Quran 22:17)

Suggested reading: We Will be Judged by Our Compassion and Deeds and Not Our Dogma.

“They will have an unfailing reward. After this, what makes any man deny the
Judgement?”

According to Seyyed Hossein Nasr and colleagues regarding this verse:

As translated, this verse is a  question posed to those who deny the revelation, the Resurrection, and other aspects of religion. It may also be addressing belief in the Prophet speciﬁcally, as if to say, ‘Who would deny thee, O Messenger, after the appearance of these proofs of religion’ (Q, R, T),  though this reading is considered grammatically problematic by some (Al). The verse also indicates  amazement that anyone could witness human beings coming from a drop (see 16:4; 18:37; 22:5; 35:11; 36:77; 40:67; 53:46; 75:37; 76:2; 80:19) and rising to the most beautiful stature, yet still deny the Resurrection (Al, Q, R).

The first creation becomes a powerful proof for the second creation or Afterlife.

“Isn’t God the Best of the Judges?”

The righteous believers can always find comfort and consolation in the justice of the Most Just. According to Seyyed Hossein Nasr and colleagues regarding this verse:

One thought on “Surah Tein: The Fig — A Metaphor for Pluralism”